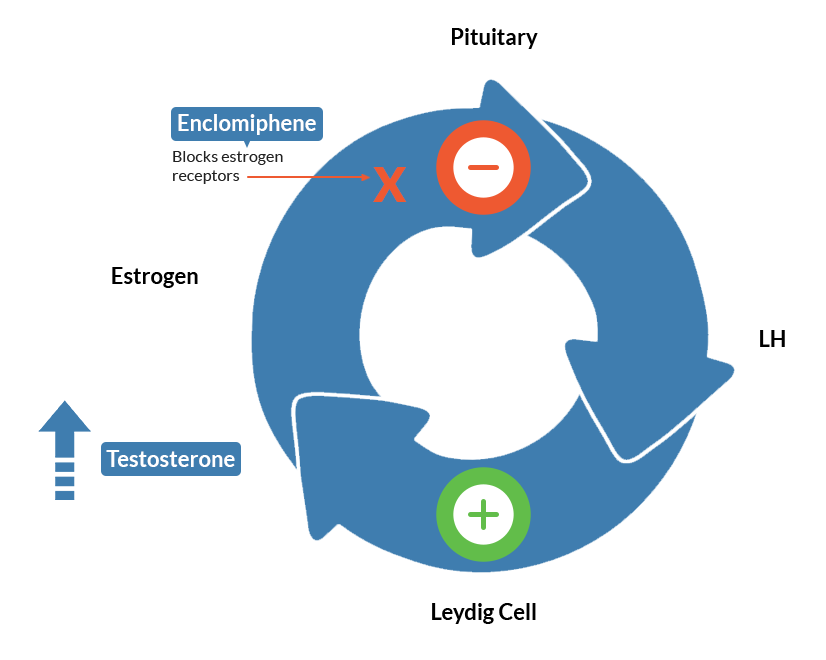 Selective Estrogen Receptor Modulators (SERMs) act as estrogen antagonists—they block estrogen from binding to the estrogen receptor in the brain, at the hypothalamus and the pituitary gland.

So when the brain thinks that it’s not getting enough estrogen, it stimulates the production of the hormones luteinizing hormone (LH) and Follicle Stimulating Hormone (FSH), which increases the testes production of testosterone and sperm, respectively. This cleverly stimulates your body into producing more of its own natural testosterone!

Enclomiphene is the purified isomer of Clomid (Clomiphene Citrate), which has been FDA approved since 1967 for fertility in women, and has been commonly used off-label in men. Many research studies suggest Clomid “is safe and effective with few side effects when used as long-term treatment of hypogonadism (low testosterone)”2 and is an “effective and safe alternative to testosterone supplementation in [young] men wishing to preserve their fertility”.3 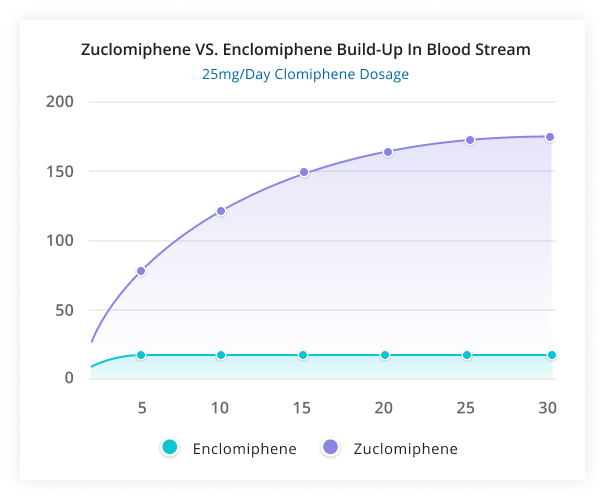 However, Clomid is actually made up of a mixture of two isomers: 38% zuclomiphene and 62% enclomiphene. Zuclomiphene is an estrogen receptor agonist (increases estrogen) that stays in your system a long time and accumulates much more over time than enclomiphene.4

Clomid is believed to cause some minor side effects such as mood swings, depressed mood, irritability, anxiety, gynecomastia, and libido issues that can develop in a small percentage of patients over time.5

"The literature has suggested that most of the beneficial effects of clomiphene are due to the trans-isomer enclomiphene. Zuclomiphene contributes little to the intended outcomes.“6 Maximus’ cutting-edge innovation leverages purified Clomid to maximize the amount of enclomiphene present. Thus, using this new, purer form “maintains the androgenic benefit of clomiphene citrate without the undesirable effects attributable to zuclomiphene”, and has been shown to yield increased testosterone levels and maintain sperm concentration (unlike TRT).6 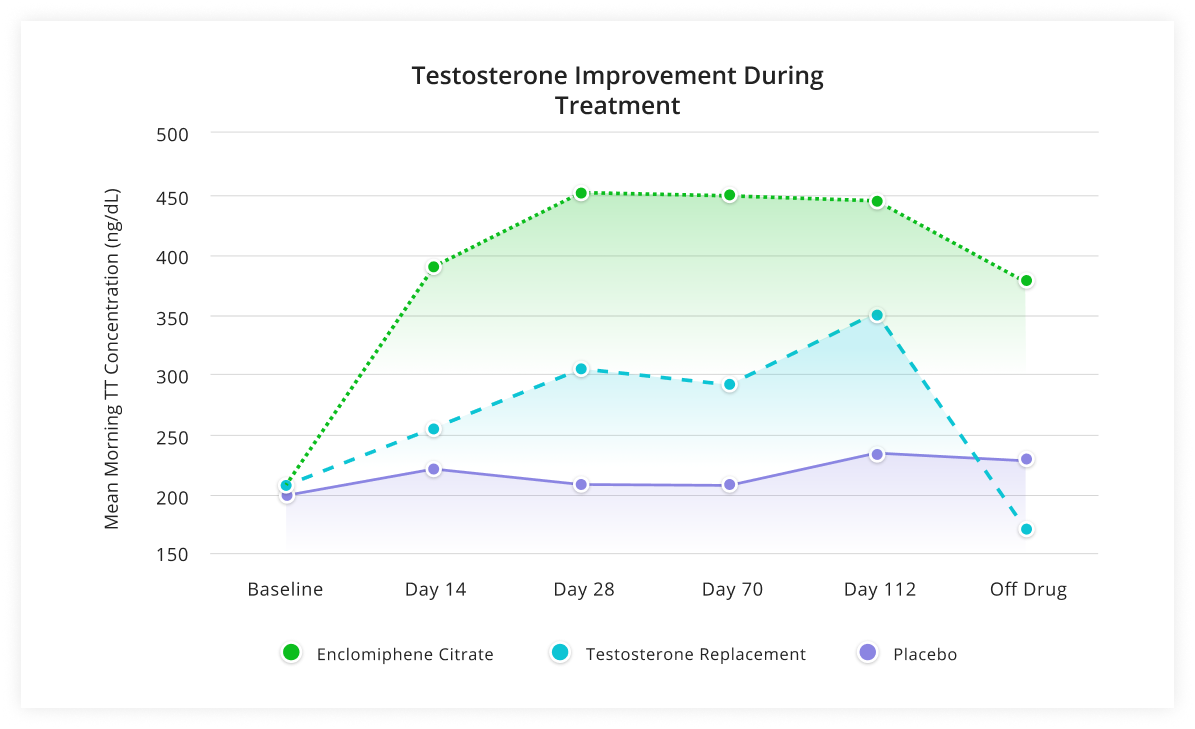 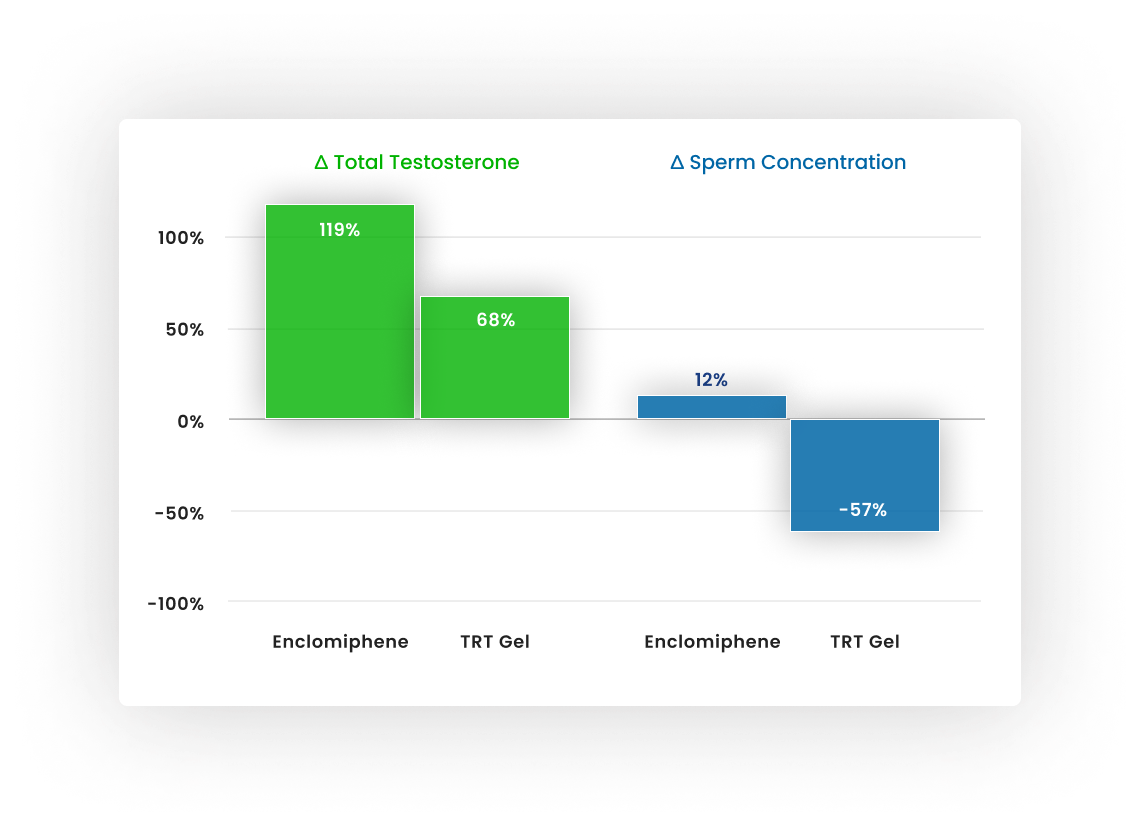 In addition, enclomiphene stimulates the testes (and actually increases their size) to produce Luteinizing Hormone (LH) & Follicle Stimulating Hormone (FSH), which is how the body naturally and endogenously produces testosterone and sperm.

Side Effects Are Minimal:

The adverse effects of enclomiphene have been extensively studied during phase II and phase III clinical trials. The drug is generally well tolerated with side-effects occurring relatively rarely.6

“Overall, there was no evidence of drug toxicity and rates of adverse events were not significantly different from placebo.”6

While we maintain our position that supplements do not meaningfully increase testosterone on their own, they can address underlying hormonal deficiencies that may be limiting the efficacy of our protocol. In particular, most men are deficient in fat-soluble vitamins, which actually function as hormones in the body.

For example, our first validation study showed that 66% of our clients living in Los Angeles were Vitamin D deficient (<30 ng/dl) and 100% were below the optimal (>45-50 ng/dl) range. This is critical because as Dr. Sarfaz Zaidi put it, “vitamin D is not a vitamin but a hormone. Vitamin D deficiency is a hormonal deficiency—an extremely common endocrine disorder. Similar to other hormonal deficiencies, hormone D deficiency (HDD) has a wide range of ill effects.”8 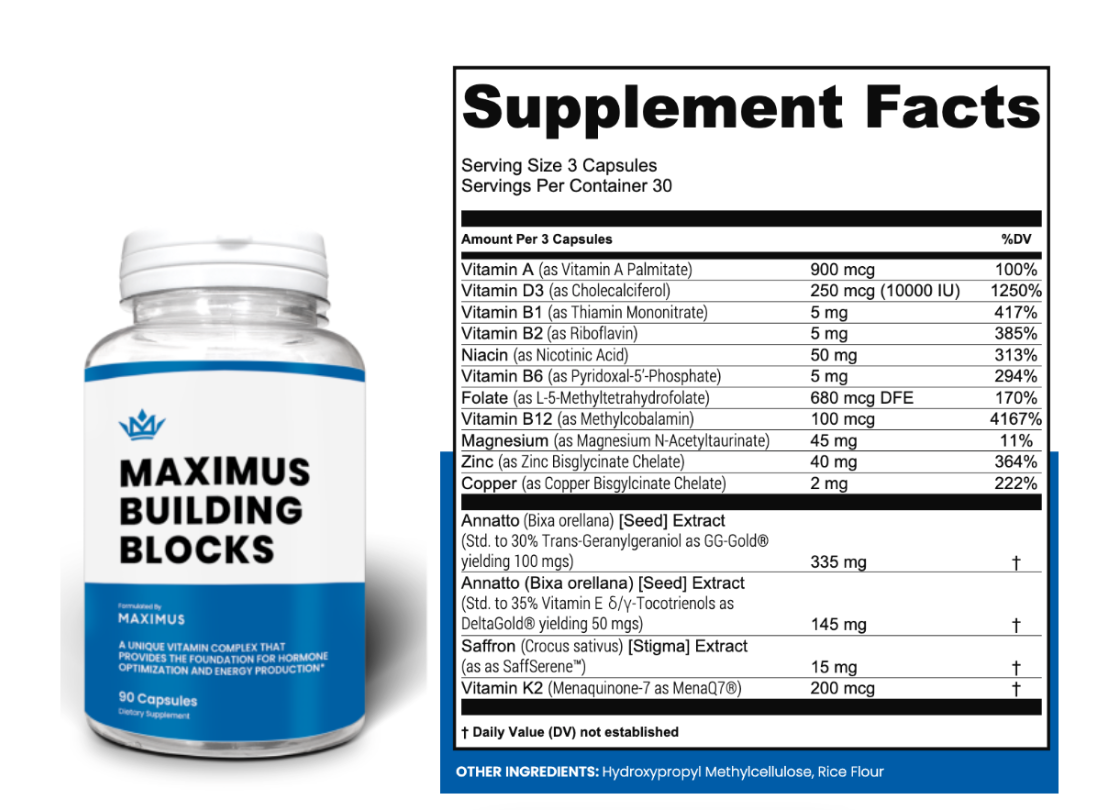 The Maximus Building Blocks supplement is an essential multivitamin that optimizes energy production and prevents nutritional deficiencies that impair hormone production. It includes the best high-potency, bioavailable forms of 15 key vitamins and minerals in clinical-level dosages, which are not commonly found in standard multivitamins. It’s been formulated to work synergistically with The King Protocol to enable your body to produce and maintain optimal levels of testosterone.

The Building Blocks supplement is superior to alternatives on the market, some of which charge $60+ for a 30 day supply.

Already taking supplements? We recommend that you discontinue any supplement or multivitamin that you may be taking that overlaps with ingredients in Building Blocks to prevent excessive dosages (which will save you money, as Building Blocks is best-in-class).

Each ingredient in Building Blocks has been carefully researched and sourced. Read on to learn more about the power packed in each ingredient.

Vitamin A functions in a hormone-like manner to regulate the expression of a number of genes and body functions, including testicular function and sperm production, and Vitamin A deficiency adversely affects testosterone secretion.9,10 In Dr. Chris Masterjohn’s article, “Vitamin A: The Forgotten Bodybuilding Nutrient”, he notes that Vitamin A “is essential to muscle-building and may be the bodybuilder’s most potent weapon… [given] diets very high in protein… deplete vitamin A reserves.”11 Vitamin A is necessary for the utilization of protein and the production of testosterone and other growth factors, and so we include it here at a higher dosage to balance the higher doses of the other fat-soluble vitamins/hormones.

Vitamin D plays a critical role in formation of hormones, bone, muscle function, immune function, glucose tolerance, and cardiometabolic function.12 Studies show that men with sufficient Vitamin D levels had significantly higher levels of testosterone and significantly lower levels of SHBG when compared to Vitamin D insufficient & deficient men.13 One randomized controlled trial also showed that daily supplementation of 3,332 IU vitamin D increased free & total testosterone levels by 20% & 25%, though this finding has not been consistently replicated.14 We find that almost all multivitamins significantly underdose Vitamin D (1-2,000 IU) and that a higher dose of 10,000 IU (the upper tolerable limit) is necessary to get most men from deficient to optimal ranges and ensure testosterone production.

Vitamin K is also critical to take alongside Vitamin D to make sure calcium is going to the right places (i.e. your bones instead of soft tissues like your arteries). Vitamin K2 has been demonstrated to improve heart health, increasing cardiac output as well.15

The MK-7 version of Vitamin K2 has been shown to have greater bioavailability than MK-4 when taken as a supplement.16 This is the form Maximus includes in Building Blocks.

A recent study showed that no matter what form of Vitamin K you consume, the body converts it all into MK-4 in your tissues.17 MK-4 is “should be considered and consequently classified as a hormone” that activates a plethora of genes.18 Studies show that MK-4 stimulates testosterone production in rats through via activating CAMP & PKA, doubling testosterone levels compared to control, though this has not yet been replicated in humans.19

Vitamin E actually has eight different chemical forms (alpha-, beta-, gamma-, and delta-tocopherol and alpha-, beta-, gamma-, and delta-tocotrienol) and is often misunderstood since 90%+ of research has been done on the tocopherol forms most commonly found in supplements. Dr. Barrie Tan discovered the tocotrienol forms, which are much more potent free radical scavenger and antioxidants.20 For over 100 years, Vitamin E has been known to be critical for fertility, as it is involved in the HPG Axis’ production of LH (which stimulates production) & FSH (which stimulates sperm) and nearly doubled the testosterone increase (from ~500 ng/dl to 1000+ ng/dl) in response to HCG stimulation (which functions similarly to enclomiphene).21 Studies also show tocotrienols specifically have synergistic effects with SERMs (Selective Estrogen Receptor Modulators) in regulating estrogen.22 Thus, 50 mg of this extra potent tocotrienol form of Vitamin E is included without any of the tocopherol form that may interfere with its function.

Geranylgeraniol (GG) was discovered by Dr. Barrie Tan, the world’s leading expert on Vitamin E tocotrienols (who we hosted on the Maximus Podcast). GG is the side-chain of MK-4 that is likely responsible for its effects, and may also have unique benefits in promoting muscle protein synthesis (and is inhibited by prescription statin drugs, which is the likely explanation for why they cause muscle pain). In vitro and rat studies show that GG enhances testosterone and progesterone (its precursor) via cAMP/PKA signaling. Researchers concluded that GG has “potential benefits… as a therapeutic agent for low testosterone levels, such as late-onset hypogonadism in men.”23 Building Blocks uses a clinical strength dose of GG to ensure your requirements are met.

Collectively, the B vitamins play important roles in a variety of critical biological processes. Much of the attention given to B vitamins is for their role in mitochondrial function and energy metabolism.24 But they are responsible for much more than energy production, including: DNA synthesis and repair, immunity, and steroid activity.25

As noted above, Maximus uses the best high-potency, bioavailable forms of vitamins. For instance, the Pyridoxal-5’-Phosphate (P5P) used for Vitamin B6 supplementation skips hepatic conversion processes, making it the optimized form (vs Pyridoxine Hydrochloride) for supplementation.

Magnesium plays a pivotal role in Adenosine triphosphate (ATP) synthesis, which most individuals recognize as an energy source for cellular reactions.26 ATP is important for steroid production.27 Ensuring your body has the resources necessary to generate energy is therefore foundational to hormone optimization.

It should not be too surprising then that studies find magnesium intake is positively correlated with testosterone.28 Supporting this observation, a study of both sedentary and athlete subjects showed magnesium supplementation supports increases in free and total testosterone values.29
Interesting research from group Guillaume et al. shows that magnesium may actually mediate variation in T-SHBG affinity, increasing the amount of biologically active testosterone.30

The form of magnesium used in Building Blocks, magnesium N-acetyltaurinate, has been shown to absorb rapidly and achieve higher tissue concentration in the brain than other forms of magnesium. This advanced availability has been found to be associated with a decrease in anxiety orders.31 Other studies have demonstrated greater resilience of the brain to damage while supplemented with magnesium N-acetyletaurinate.32

Beyond testosterone and reproductive health, zinc is vital to gastrointestinal, neural, immunal, and most physiological systems in the body.36

Copper, like zinc, is critical for reproductive health, as it acts as an essential cofactor for multiple processes.

Studies in men (as well as animals) have shown that copper is beneficial to semen and sperm. Sertoli cells are less active with a copper deficiency, which is reverted when copper is supplemented.37

An ever-increasing body of literature on saffron and its constituents endorse its benefits to humans. Anti-inflammatory, anti-oxidant, DNA-protecting, and anti-atheroslcerotic properties are among the benefits observed in studies. It has been suggested that the use of saffron may be effective in supporting disorders ranging from coronary artery diseases, hypertension, and even learning and memory impairments.39 40

A pilot study in men with erectile dysfunction found improvements in sexual function (measured as number and duration of erectile events) when treated with saffron daily.41

Saffron in the form of extracts, as found in the Building Blocks supplement, possess greater potency.

Our new pharmaceutical-grade Building Blocks supplement comes custom formulated, and is only available directly through our pharmacy partners as part of a King Protocol subscription.

We strongly recommend you take it with a fatty meal (or any fat such as MCT oil in your bulletproof coffee) for proper absorption, ideally in the morning alongside your prescription medication. The recommended 3 capsules/day will provide 30 servings, which aligns exactly with the dosage count of the prescription medications provided as part of The King Protocol.

Ready to sign up for The King Protocol? Complete the following medical questionnaire to see if you qualify.

Already a King Protocol subscriber? You’ll be presented the opportunity to include the Building Blocks supplement during your next intake.

*Maximus makes no promise or guarantee of what medications or supplements are prescribed, as these are always determined by the judgement of your clinician to decide what is appropriate care for you.

Products
KingLoverBuilding BlocksFAQ
Who We Are
CommunityCareersContact
Learn
Testosterone 101PodcastsThe Science
Sign up for our Newsletter
Get notified of new insights from Dr. Cam, gain early access to new Maximus protocols, & receive our e-book free.

Waiting for Maximus to launch in your state? Sign up to stay in the loop.
Copyright 2022 Maximus Inc. All rights reservedTerms of UsePrivacy Policy